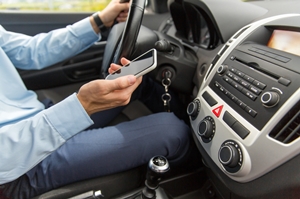 There are many types of distracted driving, including eating, drinking, and using a GPS system in the car, but the rise in accidents due to distracted drivers corresponds closely with the popularity and use of cell phones. Driving in a distracted manner means that you’re operating a vehicle while performing any task that takes your attention away from the road. You may move your hands from the wheel and your eyes from traffic, and you may even daydream or think about something other than driving.

Despite understanding the potentially serious consequences of driving while distracted, people continue to do so, especially through the use of cell phones. This is in part because the human brain feels rewarded when phone notifications occur, and people believe they’re capable of multitasking, even while driving.

The Human Brain and Cell Phones

There are three significant factors that create unique motivations to pick up a cell phone while behind the wheel:

Now that cell phones have become a part of everyday life, the human brain anticipates hearing the alert noise of a text, call, or social media update. When a person hears that ding, the brain experiences a small rush of dopamine—a natural feel-good chemical leading to increased alertness, arousal, and feeling of reward. Therefore, like any drug that increases the release of dopamine, it’s easy to become addicted. A person hears that ding while driving and “needs” to know what it is.

The fear of missing out.

Because the human brain anticipates the reward of receiving mobile phone notifications, it also places false importance on the content of the message or call. For example, drivers may choose to look at their phone because they worry about being left out of social plans or an important work meeting. This fear of missing out can overpower the priority of safety in the brain and lead to disaster.

People think they can multitask.

Though some evidence attempts to suggest otherwise, solid scientific research has proven that the human brain cannot give its full attention to more than one task at a time. Driving and talking on the phone involve two thinking tasks, and many areas of the brain are involved. Instead of processing both tasks at the same time, the brain switches back and forth between the two. Even using hands-free devices diminishes the brain’s attention to safe driving.