Why Tailgating Is Still Causing Rear-End Crashes in Rhode Island

We’ve all seen someone in traffic following another car so closely that they’re almost touching bumper-to-bumper. While following too closely—commonly known as tailgating—is the most common reason victims sue a driver for a rear-end crash, not everyone does it intentionally. In fact, people may be taught the wrong method of judging the proper distance between cars as early as their driver education classes. 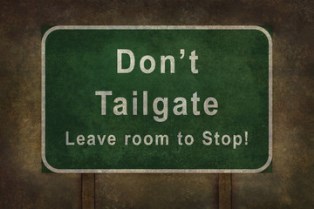 Most new drivers are taught to leave a reasonable distance between their front bumper and the vehicle in front of them. However, that can be interpreted in different ways by different drivers. Many teenagers taking their first driving courses are told to use the “two-second rule” to judge the distance: the driver chooses a stationary object at the side of the road ahead and counts aloud. If the driver passes the object before he finishes counting to two, he should leave a larger space cushion.

Many researchers have argued that two seconds is simply not enough time to prevent an accident. If the person ahead slams on his brakes, drivers need enough time to:

While it may seem like all of these actions can happen in the blink of an eye, the truth is that it can take up to a full five seconds for a driver to initiate the actions that avoid a crash—and that is under ideal circumstances. A driver who is distracted, tired, or driving during inclement weather or in a vehicle with worn brakes or tires should leave even more of a following distance.

No matter how a driver is taught about tailgating, following too close to the car in front of you is still a form of negligence and can form grounds to sue a driver after an accident. At Kirshenbaum & Kirshenbaum, we can investigate the circumstances of your crash and tell you what to expect in your case at no cost to you. Simply fill out our online contact form to tell us what happened in your free initial consultation.