Responsibility for the Costs of a Car Crash With an Animal

Nearly all drivers will experience a near-miss with an animal running across the road, but some may not be able to avoid the crash. Whether an accident involves a deer crossing a rural lane at night or an escaped herd of livestock causing a pileup on a highway, there are many different insurance coverages that can be used to cover the cost of an accident—and owners can be found negligent for injuries their animals cause. 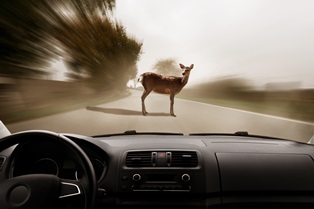 When an Animal Causes a Car Accident

Potential recovery for animal collisions will depend on the type of animal, where the collision occurred, and whether anyone else was involved in the crash. For example, different parties may be liable for accident costs if the accident was:

A rear-end accident caused by sudden braking to avoid an animal.

In many cases, a driver will stop without warning to allow an animal to cross the road, causing the driver following to rear-end the car in front. If the accident was caused by an animal that should have been restrained—such as a dog, cat, horse, chicken, or domestic and commercial livestock—both drivers could have viable injury claims against the owner of the animal.

Caused by a sudden lane departure into another vehicle.

Drivers may take evasive action to avoid the animal, striking the vehicle in the adjacent or opposite lane. If this occurs, each party’s damages will be reduced by his portion of fault. The parties may also be able to collect payment from their uninsured motorist (UM) insurance if they have this coverage in their policy.

A collision with a wild animal.

No one can be held liable for the actions of a deer, raccoon, or other wild animal. However, you may be able to secure payment for your vehicle damage and medical costs from your own insurance company if you have purchased comprehensive insurance coverage.

A result of swerving around an animal and striking an object.

If a near-miss resulted in a collision with a tree, fence, guardrail, or other stationary object, recovery will depend on whether the animal was wild or domesticated. If the animal had an owner, the victim may recover payment through the owner’s homeowner's insurance or other liability policy. If the animal was wild, the driver may be able to file a claim with his insurer under a comprehensive or UM policy.