Car Accident Risks for Pregnant Women and Their Unborn Children

A car accident can be a traumatic event, but the risks are especially high for pregnant drivers and passengers. A recent study by researchers at the University of Toronto discovered that pregnant women were 42 percent more likely to suffer a serious accident while carrying a child than if they were not pregnant. While the reasons for the increased risk vary, the conclusion is the same: pregnant women are at a higher risk of injury anytime they step into a vehicle. 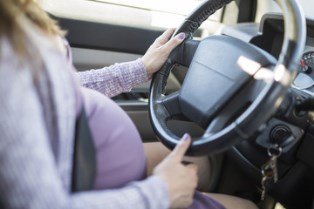 Common Pregnancy Complications After a Crash

It is vital that pregnant women seek medical care after a car accident, including making an appointment with her OB-GYN provider as soon as possible after the crash. Without immediate medical intervention, the mother or the unborn child could suffer from one of the following:

A crash that causes trauma to a victim’s head often results in a brain injury, but a fetus can suffer a brain injury even if there was no physical contact during the accident. The whiplash effect of a car accident can force the woman’s body sharply in one direction before jerking it in the other, causing what is known as a contrecoup injury. This has an effect similar to shaken baby syndrome on the fetus, who could suffer developmental delays or other birth defects as a result.

Premature separation of the placenta from the uterine wall can cause the baby to be born much earlier than planned, often resulting in low birth weight and poor organ development. In addition, the mother can suffer severe hemorrhaging that could be life-threatening without a transfusion.

Trauma to an unborn baby before the 20th week of pregnancy can result in a miscarriage, while an accident after 20 weeks of pregnancy may cause a stillbirth.