Who gets custody of the family pets in a divorce?

When deciding what spouse gets the family pet in a divorce, there are many factors to consider. The beloved family pet is not considered a child, even if it’s treated like one; rather, it’s considered property. It will need to be given a value as part of the divorce and awarded to only one spouse as part of the final divorce settlement. The courts do not consider a pet as part of a child custody case and will not always put the best interests of the pet first. If you are concerned about how to be awarded the family pet as part of a divorce, consult with an experienced family law attorney who can help with your case. 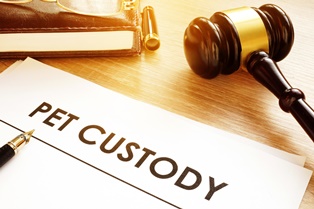 For cases where the two spouses can’t come to an agreement on who is to be awarded the pet, the court may need to intervene and make the final decision. If the court determines that the family pet is part of the marital property that needs to divided between the spouses, the following factors may be considered when a final decision is made about who the pet gets to stay with:

If there are multiple pets in the household, they may be divided evenly between the two spouses.  In cases where the pets are bonded to each other, they may still be separated from each other as part of the settlement.

Other Options to Consider

Since most courts will not award joint custody of pets, there are other options that can be considered, so both spouses can still enjoy time with their beloved companions. Mediation can be done where the two spouses, along with their attorneys, meet to come to an agreement about the custody of their pets. This process does not involve the court and gives couples a way to put the pet’s best interests into consideration.

An attorney can help guide you through the process of mediation and offer suggestions based on similar cases. They will be able to help you determine what agreement will work best for your specific situation and your pet’s needs. They can also help set up a visitation schedule that will work best for both parties.

Some possible arrangements for pets in a divorce may include:

In addition to mediation, an attorney can help create a legal agreement concerning the pet. Once arrangements are agreed to, this can be put in writing and be legally binding.

If an agreement cannot be reached and the custody of the pet needs to be taken to court, an attorney can help prove your case. They will gather evidence from sources such as a veterinarian, neighbor, or groomer to help support your case in proving that you are the best caregiver for the pet, so you can be awarded custody.