Each year, there are construction zones throughout Rhode Island and the nation while workers repair crumbling roads and highways. These zones pose a significant risk to motorists and construction workers, and the dangers of being killed or injured in a work zone accident are increasing. According to the U.S. Department of Transportation Federal Highway Administration, there were 96,626 crashes in construction zones in 2015—a 7.8 percent increase over 2014. These crashes resulted in 642 fatalities and 25,485 injuries. 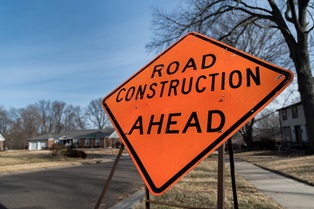 Construction zones are areas of streets and highways where work on the roads is being performed and are marked by signs, cones, and flashing lights. In most cases, drivers must reduce their speeds and merge into fewer lanes, and bottlenecks, detours, and slowdowns are common. This can cause drivers to become frustrated and make errors. Some of the main causes of accidents in these work areas include:

Speeding is one of the leading causes of accidents in construction zones. Victims are more likely to suffer long-term injuries or death because the force of collision is greater when a driver is driving faster.

Many impatient drivers will tailgate the driver in front who is trying to obey the speed limit. As a result, they are unable to stop or slow down quickly when necessary and can cause to a rear-end collision.

While it is never safe to talk on a cellphone, text, or look at a GPS when driving, it can cause a driver to miss merging signs, reductions in speed limits, or drivers in front who are braking quickly in construction zones.

When drivers are impaired, their vision, reaction time, and ability to judge distance are reduced. While intoxicated, it’s possible they won’t see a nearby construction worker, will speed, or won’t slow down or stop, with deadly consequences for the victims.

Drivers who are merging too quickly or too late can cause dangerous side-impact or rear-end collisions.